Another tank – from Henning Bergmeyer 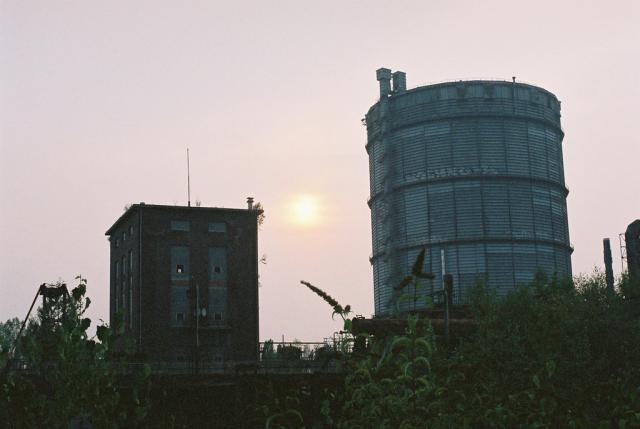 I am so excited about your tank project, even though I might never be able to visit The TANK in real life. It is now about eleven years ago that in a magic moment, a group of 9 acoustically experimentalist like-minded people met by coincidence at the same party in the unprobable city of Bielefeld in Germany; all coming from different cities, differnent backgrounds, different ages. A series of creative meetups began and, during summer, one of us guided the rest to this derelict 100m tall and 40m diameter gasometer close to the city of Dortmund. It was forbidden and dangerous to enter, as it was only opened and cleared out to be torn down soon. Words cannot describe the atmosphere and acoustics in this amazing tin can with concrete floor, but what was described in your video as a volumetric sound hits the spot. More than 30 seconds of reverberation, early reflections provided a clean and almost rhythmical delay, and by changing positions there was an almost endless varity of modulation possible.

We could only afford the most basic equipment for sound recording at that time. We visited the place several times during the summer and recorded using MiniDisc and stereo mics. Didegridoos, drumming, singing, playing with all kinds of materials we could find around that place. One day, we met a choir there, all wearing helmets as they were led around by a member of the Association for Industrial Culture. They tried to save and make accessible the currently quickly vanishing witnessing buildings and places of more than 150 years of heavy industy in the region called “Ruhrgebiet”. Well, we didn’t wear any protective  clothing… and the guide warned us, he would just bury us somewhere secretly if something happened to us… but he did not send us away and we had an incredible acoustic moment together with the choir, who we never met again later.

To cut the story short, this was the beginning of us forming the experimental group “rohton” (german: “raw clay”, “raw tone”) and we are still together. We tried to support the association in their attempts to save the gasometer for cultural purposes, but the funding for such a huge undertaking remained a problem and half a year later during winter, our “gas dome” was blown up. You can see and hear some of our recordings on our website. http://rohton.de (I’m afraid all texts are in German) On http://rohton.de/gasdom you find the dedicated album with GasDom recordings http://rohton.de/video/gasdom . If you follow the links, you can find more images, sounds and videos. There is even a flash presentation with sound toys to play with. Those who click through it can find a download link with a higher quality version for offline use on Mac and Windows. Everything is there for free listening online in 128kbp mp3. But those who want to support us can order something via Bandcamp. 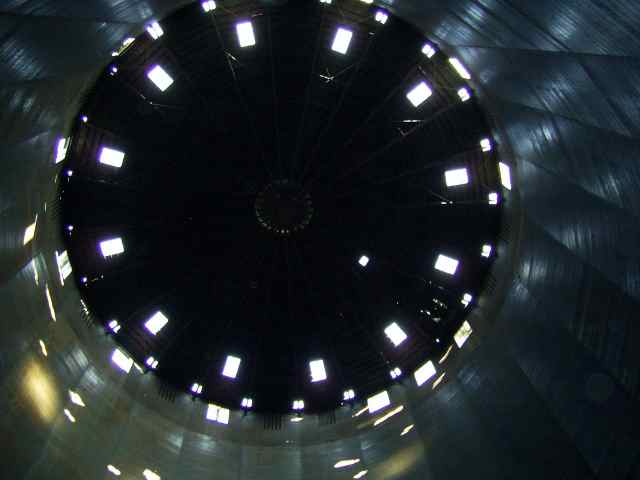 It is almost impossible to make someone understand how an almost perfect cylindrical body bathes you in sound, and how the long reverbs and echoes provide you with a perfect bio-feedback loop to perceive better what sound exactly you make. The good things and the maybe bad things stay in the air long enough to study them, to play with them, repond to them. No high fidelity recording, no matter how many channels, can transport this. You have to enter it and be given the freedom to explore undisturbed. Especially this “spiralling downwards” effect described in your video is one that is burnt into my memory, as it was one of the first I heard after entering the gasometer. I wish people around the planet would have access to such places for a while and be left alone to play, like children whisteling in a tunnel. I hope, one day, I find something like that again somewhere not too far.

Last fall we had a nice gig of four hours in the largely reverberating hall of the Bielefeld university. We do more experimentation in combining electronic noises, room sounds and playing diverse objects not originally meant to be instruments. But as wise sound lovers know, everything is an instrument. And there’s music in every sound, if you dare to hear it.

This is only to say, good luck with your crowdfunding and founding your center for sonic arts. It was our sadly unrealistic dream to realize this with the gasometer. I really hope you make it and I feel close to you and your folks in the experience of sound… in a beautifully large tin can.

All the best from Germany
Henning Bergmeyer (and rohton)