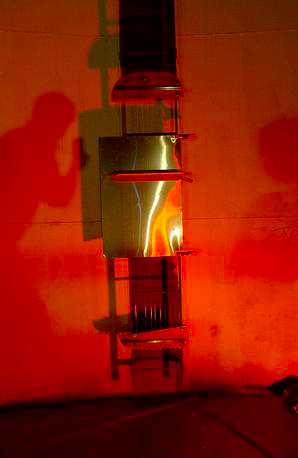 Although I’ve worked with a number of Friends of the Tank in musical situations over many years, I’ve only once been to the portal. As it turned out, much of what was recorded over the three or four days I was there — with Michael Stanwood, Bruce Odland, Mark McCoin, and briefly, Bob Drake and Brian Waters — ended up on Bruce’s “Leaving Eden” album.

That stint of several days and nights altered my hearing forever. It was, truly, a surreal and magical experience of transformation that somehow remains with me, with my hearing, to this day. There are times, randomly and while doing even pedantic things, that my ears will shift in a way that I hear whatever I’m doing, whatever’s around me, as if it were all occurring inside the Tank. This phenomenon has become an ally, a tool to hear more acutely, a device with which I can feel more deeply as a human and as a musician.

Perhaps all quasi-mystical experiences are valid only from the subjective point-of-view, but any way I analyze my experience there, especially the long nights of recording inside, the sound remains with me and continues to inform my perceptions in indescribable ways.

I’m not alone in having had transformative experiences at the Tank; as Bruce Odland said – it’s Colorado’s Taj Mahal, but with better reverb.

I hope it can be saved from the junk heap so that this golden-hued reverb, this temple of sound, can spread wider and further and transform others as it has me and my fellow Friends of the Tank.