What a scene! Kids crawling and tumbling into The Tank while their Moms and the Mayor and a Councilwoman figure out how the heck to get through that 18” porthole – finally finding the usual individualized techniques. Looking awestruck, each person’s head pointing up to that grand cathedral-like peak, while talking with such excitement, which — in The Tank — is sheer chaos. Everyone’s words were tripping over each other’s while kids were tapping on the wall and the floor and the pipes and calling to Mom. Elaine broke into Alleluia, her voice soaring with such feeling and devotion. We sang an Amazing Grace duo. The townspeople got very excited about doing a concert in The Tank – a small intimate affair, maybe with the choir. A Christmas concert? Something different than they’ve ever done, but still devotional.

As we were leaving, a couple from Buena Vista pulled up in an RV. He is a flute player who read about us in the paper and heard us on Colorado Matters radio show. I invited them to come that evening when local singer, Samantha Ward, was going to join me. Promptly at 7pm, the group was gathered and we sang and experimented with the usual stunned awareness of something unparalleled happening with the sound. 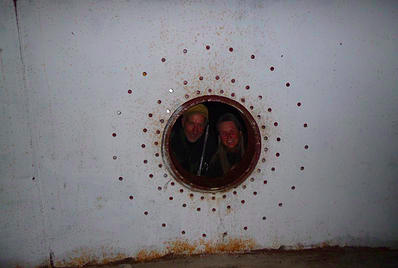 About one hour later we saw a shadow outside the porthole: two guys from a Denver punk band who were working for a few days in Rangely.  They had read about us and one of the wives had heard the CPR broadcast.  They didn’t know where The Tank was, so they drove around until the saw it and weaved their way up to it.  One had a guitar, the other was a drummer.  They joined the group.  Same experience.  Same serendipitous happening.

By the time we left, we had new believers in what The Tank can be. One said, “It has changed how I listen.” That’s what we are looking for. ​ Welcome, newcomers. Welcome, the next generation. We now know that The Tank WILL be around for the future. Congratulations and many thanks to all for support and belief in ​Saving The Tank.