What is The TANK? from Cyndeth Allison 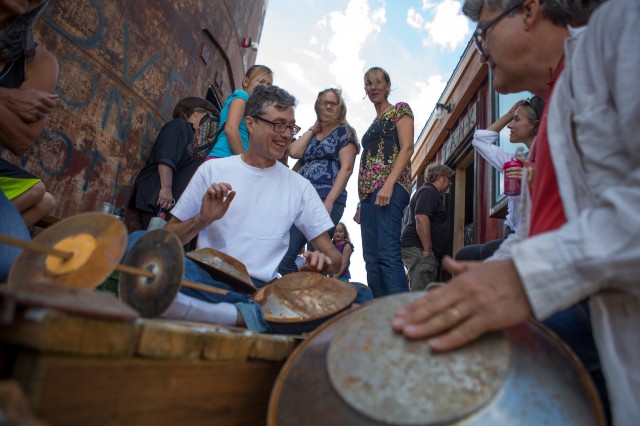 What is The TANK? To the welders who built it and the railroad men who set it in place, it was just a cylinder of steel. To several generations of Rangely high school kids, it was a secret club, a place to do those things kids do behind their parents’ backs. To the musicians who discovered its mind-blowing acoustic properties back in the seventies, it was an underground recording studio. Now it’s becoming something else, something more – a phoenix rising silver out of its ash-colored nest at the top of a hill. By dint of deep commitment, incredible organization, and amazing dedication on the part of many people, The TANK has entered a new incarnation.

The Labor Day open house for Rangely residents, a success on any scale, gave us glimpses into all these histories, as well as one into the future. The steady stream of townspeople included those who already knew The TANK. One man told me, “It’s been here forever. Forever.” Another said, “It was hard to crawl through that little porthole in the side. Now you’ve installed those grab bars – for wimps.” Someone else said, “I miss the big pipe going across the floor. It was somehow part of the ambiance of The TANK.”

Some who had never known of its existence came out of curiosity. They walked around the outside, taking in the sheer bulk, admiring the scrap-metal sculpture. One couple peered inside tentatively before taking off their shoes to enter. They quickly immersed themselves in the soundscape.

What is The TANK? It is all about that sound. The townspeople, old-time TANK visitors and newbies alike, got that. One woman, eyes wide, said, “It’s like a cathedral. The sound just blossoms.” Her hands spiraled up over her head. A man gave an impromptu Mozart concert, throwing his arms out to express how the notes reverberate in The TANK. His next piece was the ABC song. He said it didn’t matter what you sang, The TANK would give it power. He was enthusiastic about what children could learn there.

It was the kids who got it best. Inside The TANK, I watched small children sitting that way they do with their knees bent back, picking up first a rattle, then a tambourine, listening to the echoes with surprising attention. As one family emerged, the three kids chorused, “We have to come back here, Mom, we have to come back.”

It was delightful to see people enjoying sounds of The TANK. Sharing its unique resonant properties is the dream of those who are working so hard to turn a scruffy underground playroom into what will be known as The TANK Center for Sonic Arts. More than a recording venue, it will be for learning about music, about sound, about perception.

What is The TANK? I saw it as the nexus of a new community. I saw people who had never met making connections that can enhance their lives. Townspeople who didn’t know each other well were sharing stories about their long-ago experiences, and talking excitedly about the music they’d just heard. Two guys who drove up from Grand Junction, a couple of self-defined old hippies, spent a long, long time inside. Then one sought out Bruce Odland, de facto leader of The TANK’s renaissance, to find out how he could contribute, how he could make The TANK, “…a part of my life for the rest of my life.” Bruce’s genius and vision will no doubt find him a place. A man from Austin, just passing through, met San Antonian Mark McCoin, who has been involved with The TANK for years. On the spot, a TANK community sprouted in Central Texas. Paul, a recent transplant from Boulder, envisions an artists’ colony – all types of artists – growing up on the hills around The TANK. Me? I’m in – I’ve already decided where to place my weaving studio.

Local couple Tim and Mary understood both the sound and the community potential of The TANK immediately. They went straight home to retrieve a huge old saw blade they thought would make a great gong. They were right.

They also donated some smaller saw blades, some very large washers, and, best of all, some gold-panning pans. Bruce and Mark staged an impromptu percussion performance on the deck between The TANK and the new recording booth. Bruce declared these repurposed tools “a gold mine.”

It’s a cliché to say that we need community in this fragmented modern world. But clichés get repeated for a reason. What is the The TANK? It’s more than the sound it makes. The TANK can actually be an agent of change, as its vibrations circle out into the world, just as they do inside — like the woman said, blossoming up and out.